A stage-play in two Acts, by:
James Reid Stoner 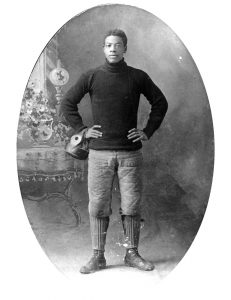 “The Black Cyclone” is the play written by James Reid Stoner which chronicles the journey of Charles Follis, the first African-American Pro Football Player. Born in Cloverdale, Virginia and raised in Wooster, Ohio, to two former slaves, Cate and Henry Follis, a naturally gifted athlete, Charles learns about football and assists in starting, and ultimately captaining the first High School Football team in Wooster, Ohio.

After high school, Charles plays baseball for the then, Wooster University Baseball and for the Wooster Athletic Club Football Team. While playing football, his outstanding play earned him the nickname “The Black Cyclone”. The play, complete with Charles family history and football scenes, chronicles Charles’ journey from Wooster, to Shelby, and how his character, ability and charisma help him to overcome severe racism in the shadow of the Civil War, and win over people’s attitudes that will ultimately change the face of sport in America forever.

For information regarding the stage-play, please contact Jim Stoner on the Black Cyclone Facebook Page, by email at jstonerbb@gmail.com or at 740.504.9399.