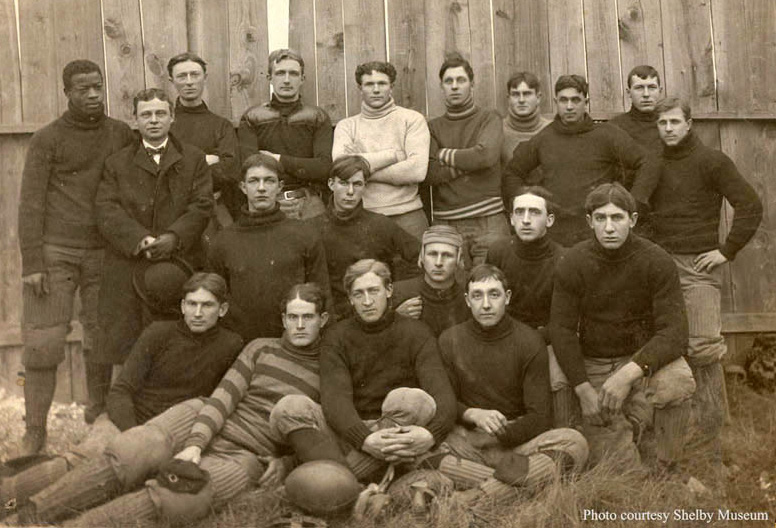 Weber’s Bar and Grill 51 West Main St., Shelby – Where the Shelby Blues frequently gathered to celebrate a victory. Charles was initially refused service here, but soon endeared himself to the community.

Weber’s Bar and Grill marks an important location in the evolution of attitudes toward African Americans in sports and in our country. Shelby was known as one of many “Sundown Towns,” discouraging African Americans from remaining in Shelby after dark. Initially, Frank Schiffer had to prepare Shelby for a star football player who was “well, different” from the usual. That player was Charles Follis, “The Black Cyclone”, who by moving to Shelby to play, became the first African American professional football player in America. Weber’s Bar was a favorite pub of the Shelby Blues football team after a victory, and the first time Charles joined his teammates at Weber’s, he was refused service. No one recorded how long this persisted, but by the time Charles left Shelby in 1906, having consistently won games and shown them what he was made of, Charles likely shared a number of drinks with his teammates here in Shelby. While in Shelby, Charles’ ability and character impressed his teammate Branch Rickey.

Charles Follis finished his pro sports career as a standout catcher and slugger for The Cuban Giants Negro League, from Trenton, New Jersey and sadly passed in 1910 of pneumonia at the age of 30. He is buried in the Wooster Cemetery with his family. In 1947, as fan interest in Major League Baseball was waning, Branch Rickey (remembering his old teammate Charles Follis’ character and ability) signed Jackie Robinson to the Brooklyn Dodgers. This signing broke the race barrier, bringing an end to segregation in professional baseball.