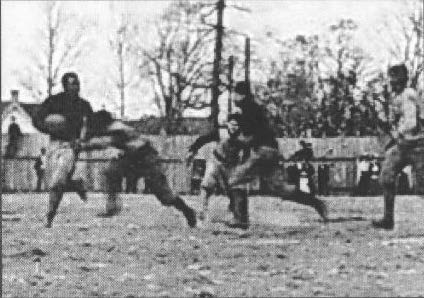 Looking north at the block between Park and Simeon Streets, was the football field where Charles Follis played in Shelby, becoming the first black professional football player in America. It was on this site that the Shelby Athletic Club, later the Shelby Blues, regularly battled the Canton Bulldogs. The brutality of football was frequently overlooked for the excitement that it brought to small towns across north central Ohio. From 1902 to 1906 an average 16 young men died each year playing football in Ohio. Teddy Roosevelt stepped in and insisted that leaders in the sport revamp the style of the game or it could be banned.

Imagine the struggles on and off the field of Charles Follis, the only African American player on the field during this brutal period. To add to the drama, Shelby was one of many reputed “Sundown Towns,” discouraging African Americans from being in town after sundown. Charles led Shelby to numerous winning seasons. Charles’ ability and character impressed his teammate Branch Rickey. Charles Follis ended his pro sports career as a standout catcher and slugger for The Cuban Giants, based in Trenton, New Jersey and sadly passed in 1910 after contracting pneumonia at the age of 30. He is buried in the Wooster Cemetery. In 1947, as fan interest in Major League Baseball was waning, Branch Rickey (remembering his old teammate Charles Follis’ character and ability) signed Jackie Robinson to the Brooklyn Dodgers. This signing broke the race barrier, bringing an end to segregation in professional baseball.